skip to main | skip to sidebar

Last Wednesday this website cannot be accessed and was facing some technical problem. A group of people had flagged this blog as a spam site hoping to stop us from publishing the truth behind Teoh Beng Hock’s death. We had to adress the problem with Blogspot and it was resume few days ago.

KUALA LUMPUR: Two men listed as shareholders of a company which was awarded contracts by the Selangor Pakatan Rakyat government have been detained by the Malaysian Anti-Corruption Commission.

Their company is alleged to have been used as a front to pay commissions to a Pakatan component party.

The two — a 22-year-old factory worker and a 50-year-old businessman — are said to have handed over to the MACC certain documents allegedly showing money banked into the component party’s account.

Sources said the MACC had identified the contractor who used the two men’s company to bid for contracts and in return he would pay them 10% of the total value of the contract for the use of their licence.

The contractor would then instruct the two men to bank in a certain amount into the account of the Pakatan component party.

The sources also said the MACC’s investigations into alleged abuse of funds by several state assemblymen had gone one step further when their initial probe revealed that another contractor was awarded more than 230 projects in a certain district.

They said the whereabouts of the contractor, who is said to be linked to a state assemblyman, could not be traced and efforts to reach him at his house, office and places where he frequented proved futile.

The MACC wanted to find out how only one contractor was awarded the contracts, said to be worth about RM500,000.

It is learnt that the MACC had visited at least four assemblymen and inquiries are being made on several others.

When that story came out, only do we understand some information and cheque in our safekeeping. This information and bank cheques is involving Lee Wye Wing of WSK Services.

The four cheques is paid for DAP Serdang Aman by Sharideen Enterprise and Sharenna Enterprise.

Lee approach them to register a company and promise to secure projects for them. They are offered 10% of contracts, the balance is to be paid to Lee. He will handle the projects and some projects are fictitous. The company must pay a certain amount to DAP Serdang Aman.

The paperwork is handled by Lee and payment approval is by Ean Yong and/or Ronnie Liu. It is the same like how Teoh Beng Hock and Ean Yong process the fake invoice and the fake project paperwork and the money is paid by Selangor State.

The copy of the cheques and bank-in slips are below: 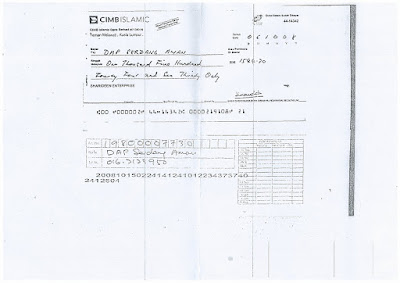 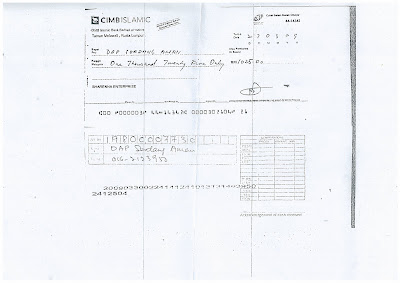 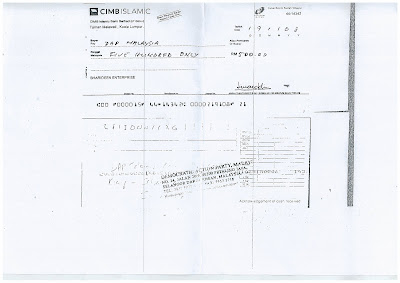 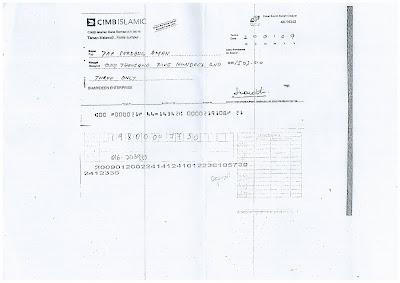 When Teoh was found dead, Lee Wye Wing was reported missing and had left for China. He appeared later.

We wonder who the missing contractor with 230 projects. Could it be Wong Chun How? If that so, it mean he got another 146 projects to the 84 projects given in Sg Pelek constituency.
Posted by 4tbh at 4:47 AM